Quasar Comics and Collectibles is a site started by a comic book collector for comic book collectors. It’s that simple. I enjoy comic books, especially older ones! I will have items from my personal collection for sale and yes, grading is subjective. However, I have a good bit of experience grading comics (more on that below) and have received excellent feedback from ebay purchasers (when I was using it, link below) and TradeMe purchasers (for the ten+ years I lived in New Zealand from late 2010 to mid-2021, link also below).

My collectibles background in brief:

I was the Manager of a used vinyl records and related collectibles store from 1986 to 1989 (way before the vinyl resurgence we have had in the last few years!). The record store is still in business (Fantasyland Records in Atlanta, GA) and the guy that started soon after me (hello Mark!) became Manager when I left and has been doing a great job ever since!

I started collecting comic books in 1977. From the early 1980s until the early 2000s I bought and sold comic books first as part of my collection and later as a part time business. I set up for a number of years in the 1980s and 1990s at the comic books conventions such as Atlanta Fantasy Fair, DragonCon, OrlandoCon and others. I ran “mail bid” and phone type auctions from about 1986 to 2002 or so, starting well before the internet took off. I was a relatively early ebay member (1997!) and sold quite a bit there from 1998 through 2010, before moving to New Zealand. See my ebay account at this link –

to get an idea of my ebay reputation.

I also built up a good reputation on New Zealand’s ebay competitor “TradeMe” when I lived there from late 2010 until mid 2021. See this link for my reputation there!

It is still active as I had to leave some coins from my personal collection behind and a friend is doing an excellent job fulfilling those orders.

In 1992, Gary Carter, then publisher of the excellent comic book collector’s magazine “The Comic Book Marketplace”, placed a test order with me to confirm my comic book grading capabilities. Here’s an article about Gary:

I was subsequently invited to be part of the “American Association of Comic Book Collectors” grading committee for the Sotheby’s annual comic book auctions organized by Jerry Weist. Unfortunately, Jerry died too soon. He will be missed. A couple articles here on him:

That was great fun and I did that all but a couple years from 1993 through the last Sotheby’s auction of that type in 2000. This was before the CGC slabs took off for comic book grading and I was able to personally hold some of the most valuable comic books around today (just check out the Sotheby’s comic book auction catalogs from those years to see what great books went through the grading committee. Too bad I did not buy any of them back then! 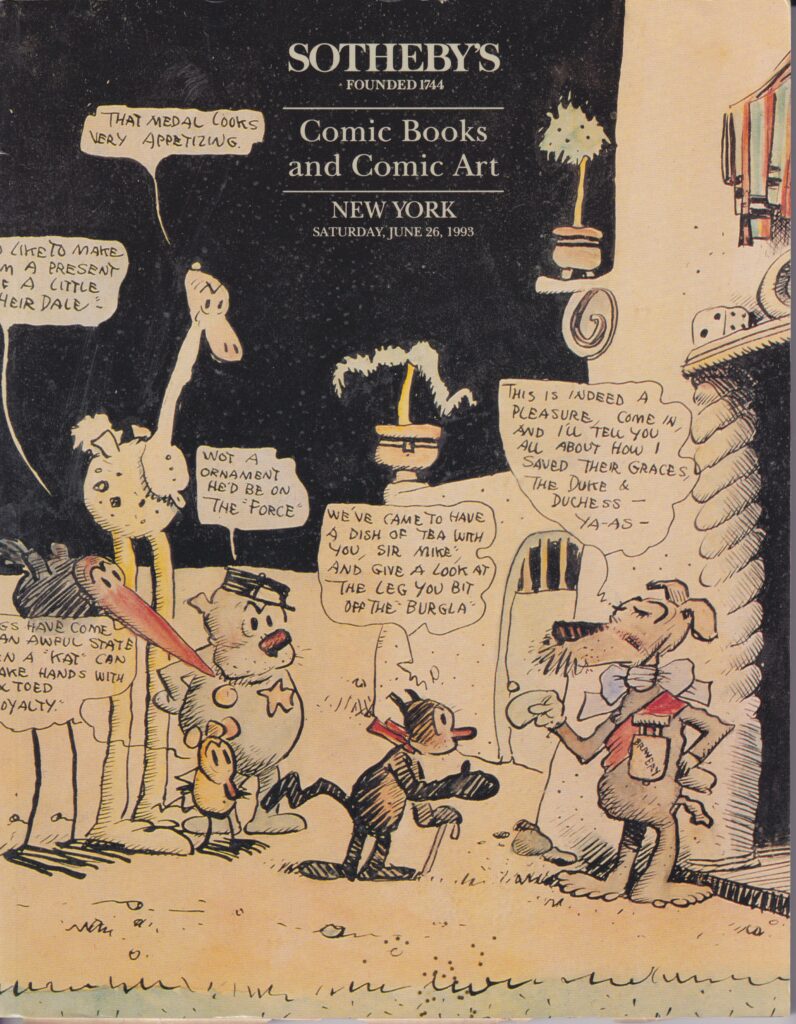 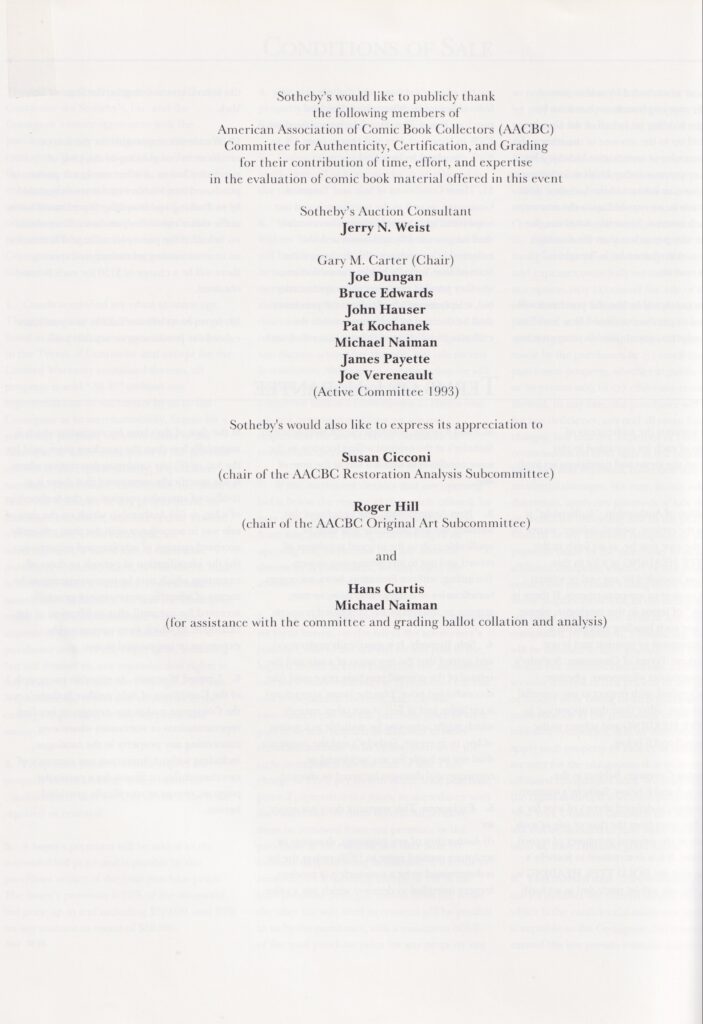 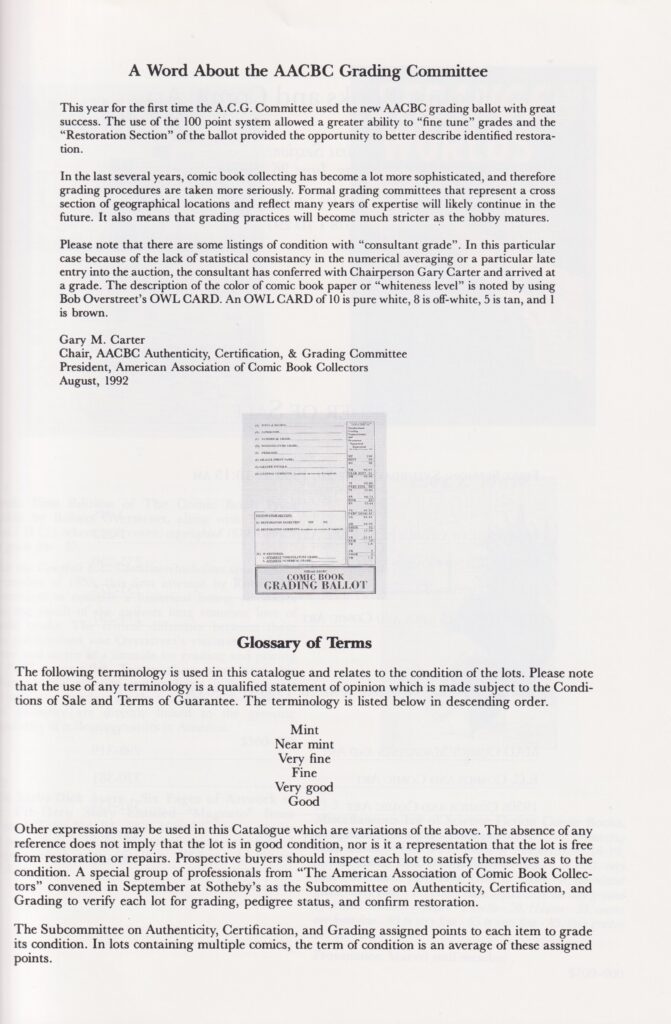 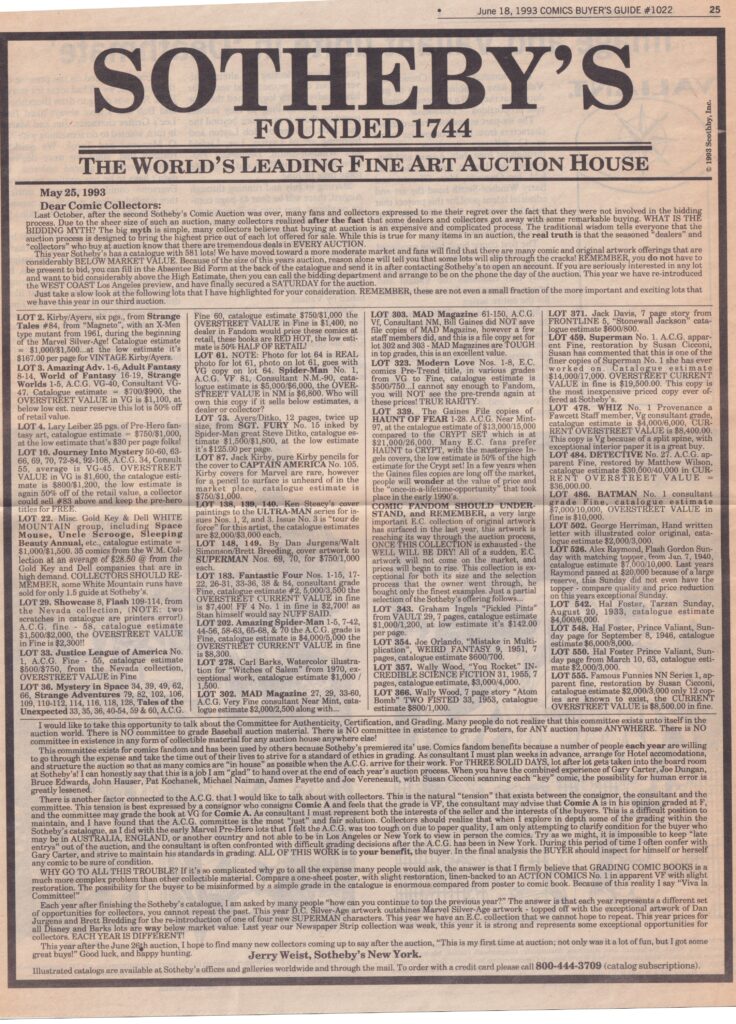 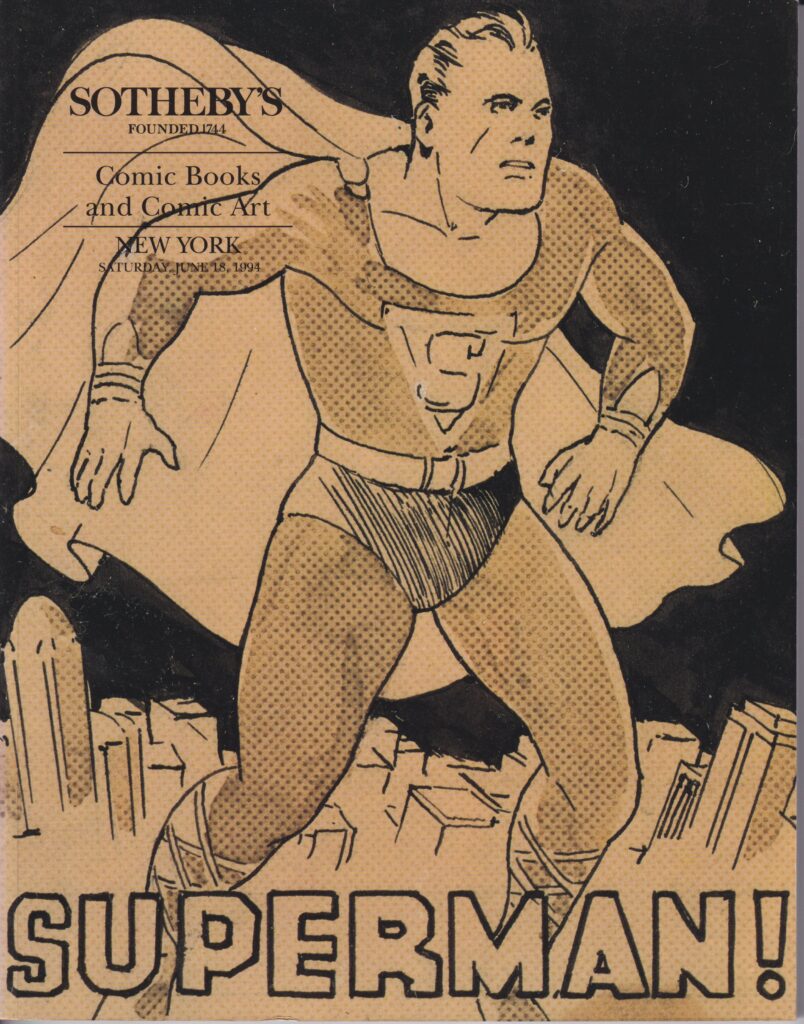 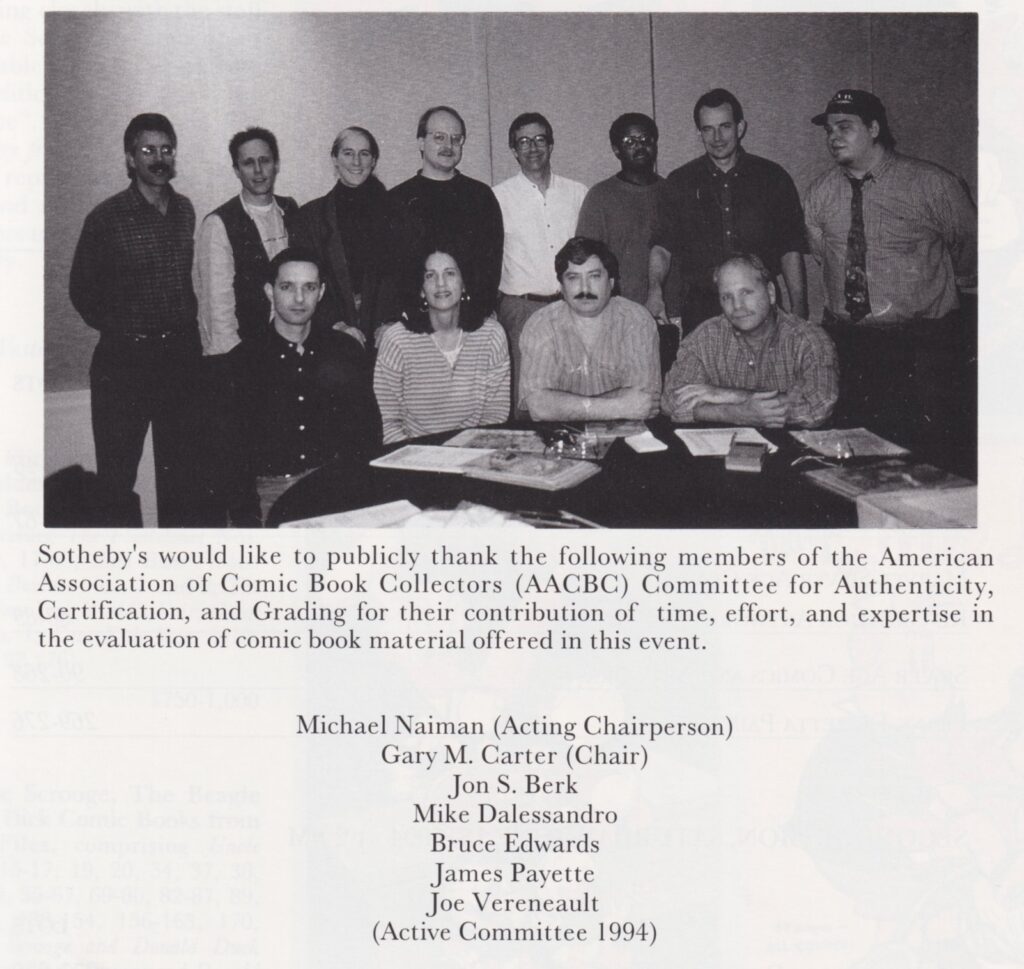 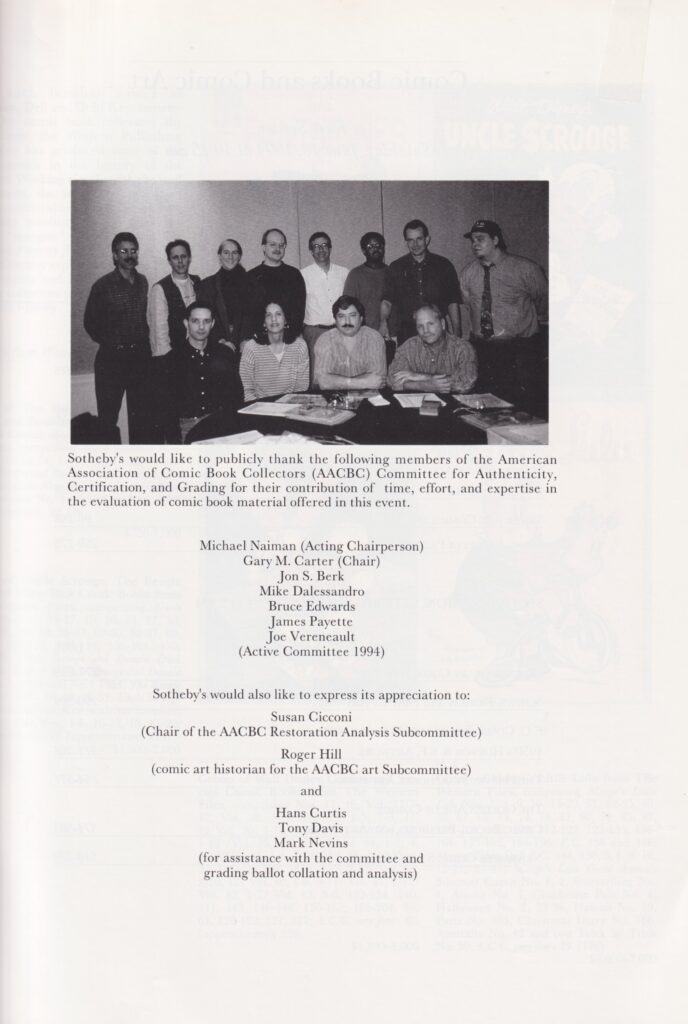 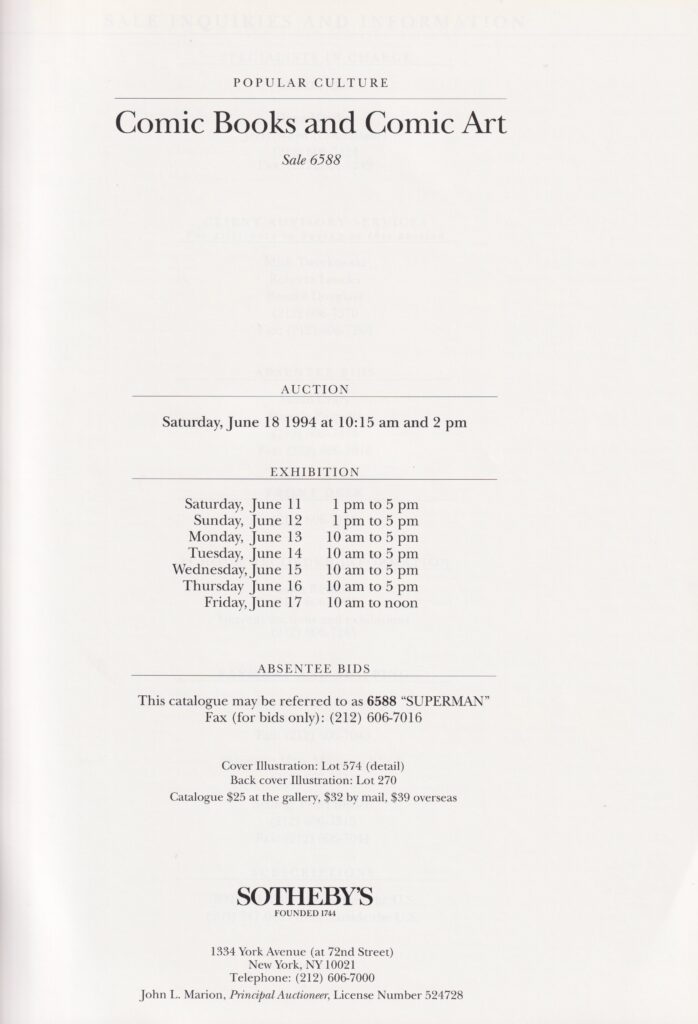 The reason for mentioning the above is simple: I have experience and do my best to be accurate and want you to be a satisfied user of this web site and perhaps a fellow collector who buys some of my collection. It is that time in life where I need to start selling off my personal collection and this web site and a few other places will be used to do that. So I hope everything goes to other collectors’ homes to be part of their collections.